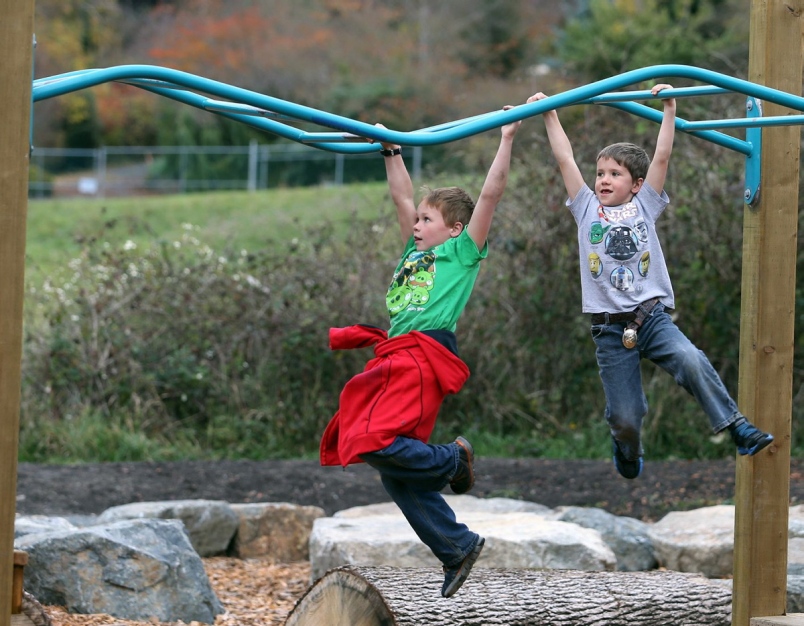 11 Sep Parents, Saanich work together to get new playground built

The work of determined parents was celebrated Monday as young children played happily in a new playground that was built at the site of a long-neglected vacant lot.
Blenkinsop Valley residents opened the Pearce Crescent Rotary Play Area on Saturday on land that had sat undeveloped for more than 50 years on a right-of-way owned by Saanich.

When a group of 200 residents first approached Saanich council about turning the property, which is the size of an average residential lot, into a recreational spot for neighbourhood children, the municipality balked.

“According to Saanich, a typical playground costs between $80,000 to $100,000 and is built to serve 2,000 to 3,000 people,” said Matt Belanger, one of the residents who worked on the project. “They made it clear they couldn’t spend that much money to build a park for just 200 people — but said they were willing to work with us.”

The residents took on the challenge, working for two years to create the park. Neighbours held block parties and other fundraisers. They applied for whatever grants they could get. They approached the Rotary Club of Saanich, which helped the residents realize their goal of raising $10,000.

“We were happy to support the initiative,” said Cathy Koshman, president of the Rotary Club of Saanich, who was at Monday’s unveiling. “We believe it’s healthier for kids to have a place to play outside.”

The project got a big boost when the Island Equipment Owners Association — the group behind the annual Christmas Truck Light Parade — chose the Pearce Crescent Rotary Play Area as its annual community project. The association supplied equipment and materials to replace the weeds.

The layout of the adventure-style play area, complete with a slide, climbing rocks, uneven log stumps, tunnels, logs and an asphalt play area that includes a hockey goal, was chosen after community consultation. About 10 children, ages 21Ú2 through five, tried out all the equipment during the official opening.

Lexie Biegun, operator of Puddles and Paints Playschool, said the play area is already a favourite with children under her care.

“I think it’s just great,” said Biegun, who was born and grew up in the area.

“I think children do best playing in nature. It helps develop their motor skills and it’s healthier for them.”